A friend of mind uses Audacity and it has a very useful feature for looking at a spectrum frequency plot of a music track (i.e. a line graph showing all frequencies used). Here's an example pic:

Would love to see this added to Goldwave!

Thanks for your time on this.

Its already there..... Go to - OPTIONS/CONTROL PROPERTIES/ then the VISUAL tab...set both left and right channels to "Spectrum" ...I also set set Level Visual to "VU Meter" . 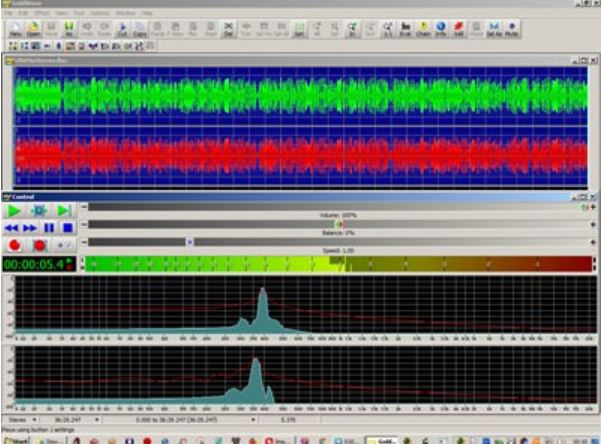 Also check out the Noise Reduction and Spectrum Filter effects. They display a frequency spectrum as well. You can adjust the time slider below the graph to view the spectrum at different times.
Top

GoldWave Inc. wrote:Also check out the Noise Reduction and Spectrum Filter effects. They display a frequency spectrum as well. You can adjust the time slider below the graph to view the spectrum at different times.

I knew about that method, but it only shows one time slice. I believe the Audacity one shows the entire track combined into one graph, and that was what I was after.

Edit: I see the "Spectrum" does in fact show peaks for the entire spectrum after playing the track, so I'm good. Thanks!
Top

Is there a way to export the time-averaged spectrum (frequency, magnitude, phase, or frequency Real/Imag) to a text file?

Similarly, is there any way to import a spectrum and use it in the Spectrum Filter?

I haven't found a way to do either, perhaps future features?

Unfortunately there is no way to import/export the spectrum data. May consider it in the future, but it would rarely be needed by most GoldWave users.
Top

I have brought this up before, but there seem to be even more tools in Goldwave that I was unaware of. Maybe somebody can suggest some that I could use.

I have a number of stereo recordings, Classical symphonic music recorded off the air on reel-to-reel tapes. Sometimes home recorders go out of adjustment and the frequency response of the two channels becomes unequal. I have digitized copies from analogue tapes and you can hear the difference between the two channels. Listening to a stereo broadcast, instruments in the center sound slightly off-center, the tail-off of their notes sounds different in the left and right channels, the tape hiss levels can be different, too.

The best tool I've found in Goldwave is the Spectrum Filter graphical image which shows both channels, superimposed. From the differences between the graphs of the two channels I have tried to write down some numbers of how to adjust the EQ of one channel or the other to get them to match better.

Well, this assumes the passage of music I've selected HAS an equal frequency spectrum in each channel. In general, the sound of the symphony orchestra is of course different in each channel. However, if I select a passage with a solo wind, like a clarinet or flute, maybe the stereo spectrum should be about the same in each channel? Maybe a piano soloist with the orchestra is placed more or less center stage.

Still, up to now, the best method has been to just adjust the EQ of each channel by ear to try and get them closer. It's time consuming and never gets them exactly equal.

Anyway, it would be nice to have some feature in Goldwave that would automatically adjust the EQ of the left and right channels to be equal. Or at least show a readout of what EQ adjustments should be made.

Izotope Ozone ($249 USD and up) has EQ matching or there are others so you can just search for "EQ matching".

It's not specifically for matching left & right channels. No matter what software you choose you'll probably have to figure make two mono files, then re-combine for stereo after tweaking.

You'll probably need to use Max/Match or some volume-matching technique after matching the frequency balance if the EQ matching software doesn't do that automatically.


Sometimes home recorders go out of adjustment and the frequency response of the two channels becomes unequal.