We've discussed this before...cuz I saw the post last night while googling for stuff, so I was inspired to actually make good on something I said I'd probably do and that is to take screenshots so we can all remember (or in some cases, see for the first time) just how much Goldwave has grown up from it's younger days.

Since these early versions are 16-bit, I can't run them natively on my copy of Win7 as it's 64-bit, so not only would a win3.x app likely not even run, but you can't run 16-bit code in long mode, at least not at the native OS level; for that, you've got to use a virtual machine.

For all this I'm using a copy of Windows (for Workgroups) 3.11 under Virtual PC 2007. I've actually got two seperate Win3.1 "machines", one has Windows 3.1 fully installed and working with all proper drivers on MS-Dos 6.22. The other machine runs WfW3.1 on top of Windows 98/Dos 7.1 with a patched io.sys file to make this all work. Both machines are allocated 256MB ram (WAYYYYY overkill). Even though both machines are set up with the exact same drivers in the same manner, the one running on top of Win98Dos seems to boot up a bit faster...although it seems the delay is network related which just raises even more questions. I do have TCP/IP on the thing...and Win32s and in fact not only did Win3.1 see my NAS machine just fine (but couldn't handle the file names), but my Win7 machine recgonizes the Win31 machine n(and can see shares)...somewhat proving how compatible smb is and making me wonder why people have so many issues getting file sharing to work. But that little bit explains why the name of my virtual machine is "31-71", 3.1 on 7.1. Intel-VT hardware virtualization was activated in VPC as well.

Since my emulated card has drivers that support insane resolutions with 16.7m colors...my 3.1 desktop runs 1024x768 (my LCD runs 1600x900), so the embedded images are scaled down to fit better, they link to the full size png.

I ran this under actual MS-DOS 6.22 because I got what I thought was strange behavior under 7.10, but it turns out it behaved the same. While not exactly Goldwave, Chris did write it and it's thought of as the pre-cursor to Goldwave. I have to admit, I've got no idea how to really use it. I couldn't get any sound output from it but I attribute that to sound emulation...the one time I did get sound out of it was running it from dos prompt in 3.1 and it was shrill and obviously had a bit-depth mismatch.

The very first version of Goldwave. It does bear a slight resemblance to the current UI. Despite the fact it reports over 200MB free, it fails at opening large WAV files due to the fact it obviously can't actually utilize that much ram...which is why I had to make a small wav file to cram on the vm for screenshot purposes. 1.0 was actually copied over to the PC last and picked up the registration info I entered for 3.03....which is the actual registration info I memorized from years of reinstalling Windows 95. A very basic WAV editor, but, for 1992, at a time when the CD was just turning 10, this was huge.

This is a list of the effects available in 1.0.

The farthest back oldversion.com goes is 2.11. So here it is. The obvious difference is the Device Controls is now called Device Controls and there's two scopes with the addition of the spectrum output, which is displayed. There's numerous new functions and the effects list has just about doubled.

Continuing with the trend of grabbing an early copy of every major revision, I picked up 3.03. The first thing I thought when I booted this up was "holy crap I haven't seen this in a while". I started using Goldwave somewhere around the 3.2x series...so this likely only predates me first using it by about a year. Device Controls has now taken it's "classic" look and has a couple of added visuals; spectrogram and the spectrum bars. This worked pretty much how I remembered it and was an enjoyable blast to my early days with this stuff. It also amazed me that, how over time, I never noticed how much large the number of toolbar icons got. This time, the about reports what must be a more realistic repsentation of how much ram can be utilized, since it reports 15 free and not the 240 some of Windows and the previous Goldwaves. Interestingly enough, when attempting to load a 3 minute wav file at 44/16 (you wanna guess how much fun it is to find a mp3 decoder for MS-DOS???) 1.0 and 2.11 both gave me "insufficient memory" errors. 3.03 was able to load and play the file without issue. I also saw "Deflashing to disk" when I ran an effect...a dialog box I hadn't seen in a LOOOOOOONG time.

Here's the effects list for 3.03. The volume features change, fades, maximize and shape. Filter features a noise gate and user-defined...which has input similar to expression evaluator. I briefly remember seeing this...but it was phased out either in 4.0 or before 4.0 becuase I didn't see it for very long. The High/lo pass filters are contained as presets in this..it's a function I never had a chance to understand because it was gone.

That's pretty much all I have for now. I can't remember what the last version of goldwave was that runs on 3.x, but I'm sure I'll stumble across it as I download other versions to play with.
Top

you wanna guess how much fun it is to find a mp3 decoder for MS-DOS?

Thanks for the screenies & info.
Stiiv
Top

Acttually, it took me a bit to find a copy of the ancient l3enc/l3dec...and amazingly when I found a copy it was the first time I'd ever seen one with the shareware warning. I also did stumble across some 16-bit MS-DOS compiles someone did of LAME.

Truth is, I installed Windows 98 in a VM last night and all the ancient 16-bit versions ran just as I expected to...so I probably could have saved myself some hassle and done things in that, but i felt like going with 3.1 for the authentic feel.

It appears from digging through the whatsnew.txt that the conversion to 32-bit occurred with 3.20 - so i'm not sure if that'll run in 3.1 with the Win32s extensions or not...I'll find out sometime later when I get around to playing with it again.

Also on the slightly unrelated 3.1 note. http://dewdude.com/vpc/win31stream.jpg is a copy of Winamp running on Windows7 streaming a file off SMB shares...as indicated by 3.1 indicating a connection. 3.1 couldn't talk to 7, and that's because of authentication issues and non-supported encryption. http://dewdude.com/vpc/win31share.jpg shows the expected 8.3 of LFN from a "shared folder" in VPC. The "shared folder" uses some sort of network driver since you have to install support for whatever OS you install...and it's not just straight networking either...but it is a way of getting stuff from the host OS to the guest OS. http://dewdude.com/vpc/freenas.jpg shows what happens when you attempt to access a samba share. Freenas is a freebsd based machine...the file names are 100% random gibberish. Sure, you can access teh files, but you cannot tell what they are without opening them.
Top

ScopeTrax requires access to actual hardware and won't run properly on a Virtual PC. It changes the timer interrupt to run at about 22050 times a second (normally it's just 18.2 times a second in DOS). A Virtual PC can't do that. Windows won't either. Audio is played through the old PC speaker and no sound card is needed (unless you select the SoundBlaster option). Some computers don't even have a PC speaker anymore. There's an option to play audio data through the printer port, so you could create your own sound card using a simple resister ladder. Here is one I built for testing: 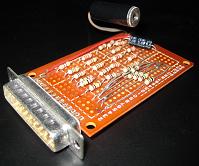 Things were a lot more fun it those days. Now you have to wade through ugly and complicated Windows APIs to do even the most basic things and hope that the drivers work (and they often don't).

Oh man... I am happy that youse guyses like to fool around with all that arcane stuff! Where would we be if everyone were like me -- I look at all that stuff and say wha...?
Top

Yeah, I had a lot of fun playing around with that stuff when I did...then the PC had to be reformatted and that's taken a while to resolve (plus all this bandwidth has drawn me away from places like webforums...and even IRC for that matter).

Chris: I thought I'd have some success with ScopeTrax on either VM since both seem to do a lot more hardware emulation and run things better since the addition of IntelVT...i know I got OS/2 Warp running where as it never would in a VM before...but really..I'm not sure just what exactly goes on in a VirtualMachine and you wrote the exe...so I'll go with what you said. With that being said...I'm quite surprised I was able to get something out of it at any point in time.

I never did find out what the last version I could run under 3.1 was. I think somewhere around 3.2 (i haven't glanced at the wahtsnew in a few weeks..plus i lost all my old versions and vms) the whole thing went 32-bit...but i couldn't find anything from that era to see if win32s allows operation.

Of course I realized about a week later that I could run all the old versions under my Win98 VM and had much better success in getting them to do stuff. Oh well. It was fun.
Top
Post Reply
6 posts • Page 1 of 1